Lists as a convention

Some languages include a list data structure. Common Lisp, and other languages in the Lisp family, make extensive use of lists (and the name Lisp is based on the idea of a LISt Processor). However, Common Lisp doesn't actually include a primitive list datatype. Instead, lists exist by convention. The convention depends on two principles:

That's all that there is to lists. If you've read the example called What is a cons cell?, then you know that a cons cell whose car is X and whose cdr is Y can be written as (X . Y). That means that we can write some lists based on the principles above. The list of the elements 1, 2, and 3 is simply:

However, because lists are so common in the Lisp family of languages, there are special printing conventions beyond the simple dotted pair notation for cons cells.

The list notation is shown most clearly by several examples:

To better understand the semantics of conses and lists, a graphical representation of this kind of structures is often used. A cons cell is usually represented with two boxes in contact, that contain either two arrows that point to the car and cdr values, or directly the values. For instance, the result of:

can be represented with one of these drawings:

Note that these representations are purely conceptual, and do not denote the fact that the values are contained into the cell, or are pointed from the cell: in general this depends on the implementation, the type of the values, the level of optimization, etc. In the rest of the example we will use the first kind of drawing, which is the one more commonly used.

Here is a tree-like structure: 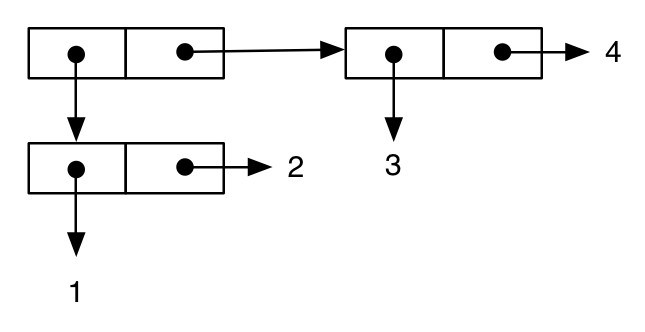 The final example shows how this notation can help us to understand important semantics aspects of the language. First, we write an expression similar to the previous one:

that can be represented in the usual way as: 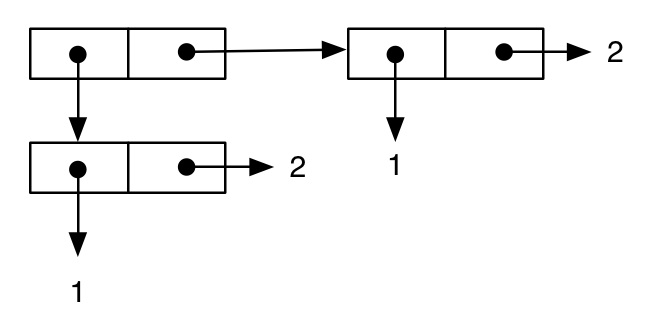 Then, we write a different expression, which is apparently equivalent to the previous one, and this seems confirmed by printed representation of the result:

But, if we draw the diagram, we can see that the semantics of the expression is different, since the same cell is the value both of the car part and the cdr part of the outer cons (this is, cell-a is shared):

and the fact that the semantics of the two results is actually different at the language level can be verified by the following tests:

What is a cons cell?

A cons cell, also known as a dotted pair (because of its printed representation), is simply a pair of two objects. A cons cell is created by the function cons, and elements in the pair are extracted using the functions car and cdr.

Cons cells can be printed in dotted pair notation:

Cons cells can also be read in dotted pair notation, so that

(The printed form of cons cells can be a bit more complicated, too. For more about that, see the example about cons cells as lists.)

That's it; cons cells are just pairs of elements created by the function cons, and the elements can be extracted with car and cdr. Because of their simplicity, cons cells can be a useful building block for more complex data structures.

Previous Topic
Next Topic
SO Community
2016-07-22
2016-07-22
2016-08-10
http://i.stack.imgur.com/VzBXN.png
common-lisp Pedia https://common-lisp.programmingpedia.net/favicon.ico
This modified text is an extract of the original Stack Overflow Documentation created by following contributors and released under CC BY-SA 3.0
This website is not affiliated with Stack Overflow
Email: tutorialpedia@outlook.com
Icon